If there's one thing you should figure out by your 20s or sooner, and carry with you throughout the rest of your life, it's that sleeping effectively is the holy grail of all things happiness related. Figure this one thing out now, and forever reap the benefits of a clear mind and a healthy, harmonious life for decades to come. Voila, that makes sleep the 5th F in our quest to achieving continuous optimization, even if it doesn't actually start with an F.

At first, I wasn't convinced that effective sleep was the solution to many of my day-to-day problems. But after investing heavily in this department for almost 7 years, I remain convinced that without effective sleep, you might as well kiss true happiness goodbye. The benefits are so much more than just feeling great the next day or being productive day-over-day.

Effective sleep lets you see the world more clearly and be able to process more information fast. You'll notice your focus levels skyrocket which allows you to get more things done in a shorter amount of time, leaving more time for other investments in your life. Your thinking speed will quadruple. The amount you absorb from reading will go up substantially, therefore opening up access to denser texts and articles. You'll fall sick less. You'll find answers to questions you never thought to ask. Your memory will improve sharply letting you remember year-old details with exquisite detail. The whole world will move around you in slow-motion and you'll wonder why everyone else is taking their time for even routine tasks. Your mental math gets better, and you'll even find it easier to learn new languages and skills!

People tend to equate effective sleep with a good and/or an expensive mattress. Before you jump into the details of mattress optimization, I propose trying out the following free techniques first. If you haven't figured out the basics first, your mattress won't matter, and it won't be worth losing your sleep over (couldn't resist that one). So start out with an inexpensive $250-$300 mattress from IKEA (like this one) until you figure out the basics. Over time, you may realize you couldn't care less about your mattress and could probably get a great night's sleep even when sleeping on the floor.

Here are the 4 biggest sleep-related strategies I'm most bullish about after ~7 years of continuous trial-and-error:

In 2010, I decided to permanently ditch the alarm clock for the first time since Grade 8. Some of my friends were talking about whether snoozing your alarm clock was good for you or not while I took a step back and realized: why bother having a conversation about a petty snooze feature, when you can ditch the entire concept of an alarm in the first place? The ubiquitous alarm clock (followed closely by your TV) is your biggest enemy to happy living, so the sooner you can run your life without one, the faster and bigger the dividends come rolling in.

It just doesn't make sense for an external source to wake you up haphazardly, when your body can do it on its own just fine, and in a more natural and effective manner than even the latest Fitbit on the market. Sure it's going to be hard without an alarm the first few months, especially if you're used to waking up to one for potentially decades. But once you get through the plateaus (and a few late meetings), you'll learn that the key to waking up on time everyday is simple — just sleep on time.

If you absolutely must use an alarm clock, like the night before an early-morning flight, use something more pleasant like birds chirping or ocean waves crashing rather than a fire truck backing out from a ditch. Your iPhone already comes with a bunch of great gentle tunes to wake up to — utilize them!

When it comes to effective sleep, the more "boring" your schedule looks, the better. You'll want to go to bed at roughly the same time every night and wake up at roughly the same time every morning. Whether you end up sleeping 6 or 7 or 8 hours each night is immaterial — what matters is that you're doing it consistently day over day, week over week, month over month, and eventually year over year. These days I go to bed between 11:30pm and midnight and wake up naturally between 8-8:30am. A solid 8-9 hours each night, after which I automatically have the answers to all my pressing problems from the previous day. 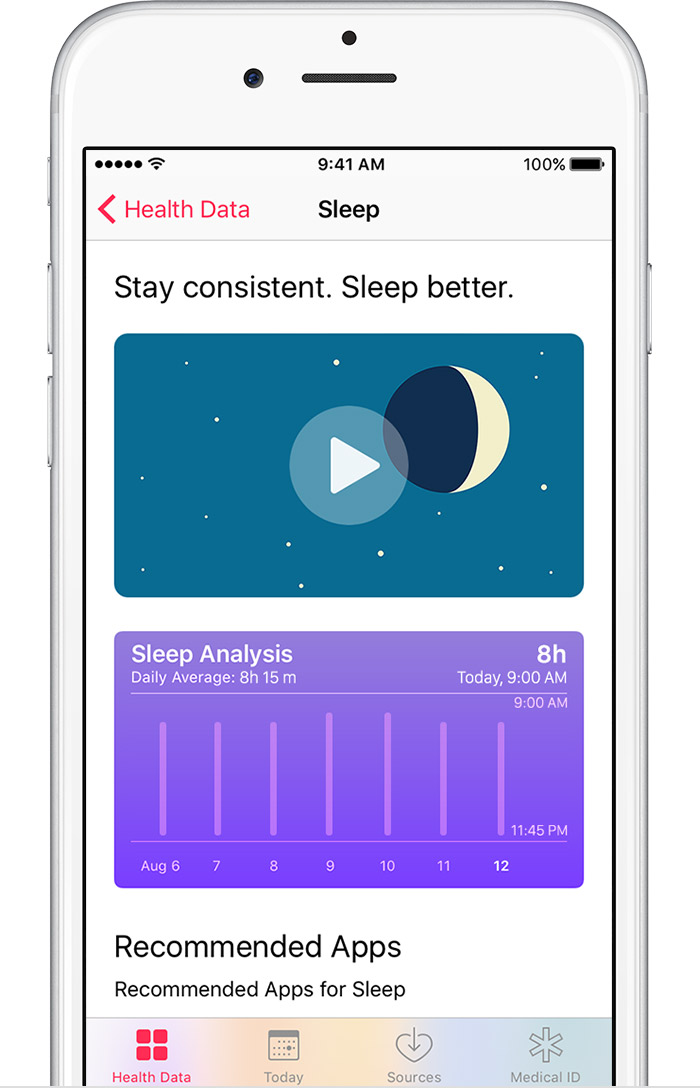 A "boring" sleep schedule is the key to effective sleep

Your iPhone's Health app does sleep tracking for you for free, so take advantage of that until you get into a daily rhythm without requiring an external aid. It even sends you gentle reminders when it's time for you to go to bed each night. If you're unable to go to sleep at your scheduled time, try reading a book (a real paper-based one) or something on your Kindle. Avoid bright/harsh lights like iPhones and iPads for at least 30 minutes prior to your designated sleep time. You can even listen to some soothing and relaxing rain music (with an auto-off timer) to help you fall asleep more naturally. A bit of light exercise or yoga 3-4 hours prior also helps me fall asleep quicker.

These days I run on a 0-caffeine diet most days. Most people flip out when they hear this, but it's true. The only thing that powers my body is water, dairy, and clean-burning vegetable oil (i.e. plants and veggies). That's all that's needed really. Caffeine is your biggest enemy to effective sleep because it injects variability into your sleep patterns and actively prevents you from getting into a deep state of unconsciousness for 8 hours non-stop which is often regarded as the cornerstone of effective sleep. It also makes your sleep schedule less "boring" (in a bad way) by regulating what time you feel like going to bed based on how many milligrams of caffeine you've consumed that day, or when the last cup of coffee was had.

When I do consume caffeine these days, which happens occasionally, I enforce a strict limit of 4pm after which I impose a caffeine ban on myself. I'm slowly seeing if I can move the curfew to 3pm these days. I've also trained myself to be satisfied with tea rather than coffee, which has a lot less caffeine in it per cup.

Once you've figured out the first three sleep basics, it's time to get serious and begin monitoring/tracking your sleep debt. Sleep debt is the idea that you can—and should—make up every lost hour of sleep the following night, or as soon as possible. If you don't, you suffer the grave penalties of ineffective sleep. Once you get up to a sleep debt of 2 hours, sirens should start going off everywhere in your head. Wam wam wam. At negative 2 hours, you should be going into P0 mode and making every effort to squash your debt that very night. A debt of 2+ hours with or without caffeine is highly detrimental to your focus, attention, and speed levels. You're practically a zombie at that point who isn't able to perform any complex task effectively within a reasonable margin of error.

Why is it important to track sleep debt? Because if you don't, you won't know how well you're doing sleep-wise and whether you need to get to bed early or not on any given day. Would a bank give you a loan without writing it down somewhere? Likewise, you shouldn't allow your body to take a loan on sleep without tracking it somewhere formally, even if it's just your head.

Ideally you'd be in a permanent state of negative debt (aka my definition of bliss), which is what I strive for these days. That is, you will always be in a zone where you have overslept by 30-60 minutes, but not anymore. This is a great buffer to carry around with you day-to-day. If for whatever legitimate reason you're unable to get to bed on time on a given day, your positive buffer will cover for you, allowing you to be just as productive the next day. Would you ever let your bank's checking account go to $0? Hopefully never. It's always safe to keep a buffer of a few thousand dollars for unexpected events. Likewise, it's always safe to carry around a buffer of 30-60 minutes of extra sleep with you so you're not constantly paying interest on your sleep debt.

Once you thoroughly understand your sleep requirements well, and how much sleep your body wants, needs, and gets, you'll be miles ahead of everyone else. You'll be figuring things out often years ahead of the people around you, and seeing patterns in life and in society that others won't even be bothered with. Hopefully you can exploit some of these patterns. If a lot of this sounds like BS to you, it should. Because that's exactly what it sounded to me when I first started looking into big ideas for sleep optimization. But over time, the strategies panned out, and my mental channels broadened, allowing me to consume and interpret more, while also retaining more. At work, effective sleep proves to be advantageous by allowing me to keep a large part of the code base in my head and to remember the historical context for why things are the way they are.

What a wonderful feeling it is to wake up so many mornings, only to realize you had forgotten some minute detail somewhere in some calculation, some thought process, or some social interaction, and you're fully convinced your conscious mind would've never thought of it during the day? The amount of post-processing, retrospection, tying of loose ends, and de-fragmentation of ideas and events that happens during a good night's sleep is just so deeply fascinating, perhaps even humbling. It's a shame how many people regularly squander this beautiful nightly process to awful habits by subjecting their bodies and minds to stressful sleep cycles. Hopefully you won't be one of them. If "pulling an all-nighter" is a badge of honor to you, you may want to reconsider. Because not having pulled one for years is mine :)