My dad and I always run into this argument. I say that I work most efficiently if my day was divided into thirty-hour segments as opposed to the usual twenty-four. He says I'm just making that up to sound cool.

Stipulating that my hypothesis is right, this means that I sleep an extra two hours each night but work for an additional four hours each day. Note that I am not working any longer or sleeping any shorter than the common man — my ratio of work to sleep is exactly the same as most healthy individuals: 2 is to 1. Yet I find that this longer period before when things repeat themselves increases my work efficiency quite drastically.

First, let's talk about why I need such high levels of efficiency. I'm not even twenty years old. I'm not the President of India. I'm not some religious missionary who has daily appointments across eight corners of the world. You're probably already crying out loudly: "Come on Rajesh, give me a break!"

I may not be the President, but I am someone who is, at least in theory, much more busier than him: I am a university student.

Allow me to explain.

When I first noticed this rather astounding phenomenon that I was able to be more productive than usual by simply extending my work day by a mere six hours, it had me as confounded as a sumo wrestler who'd woken up to find his underwear had shrunk. I thought I was being ludicrous. I thought I was suffering from psychological problems, or more religiously, "psychosomatic disorders". I first explained the problem to my room-mate Neil. He too thought I was trying to crack a bad joke. But then, as I explained and unveiled pieces of irrefutable evidence, he began to see the point.

What point, you ask?

Let me tell you, university life is a party. Last term, I took a full six-course workload when most others were only taking four. Three of these were solid courses: advanced calculus 1, quantum chemistry, and operations research. Twenty-seven hours each week just in lectures, tutorial and labs. I had to manage my own food. I didn't cook because I believed in Neil's philosophy: You only have x hours per day. You can either spend them cooking, or studying. I had to come back home and complete lengthy assignments. I had to peruse giant textbooks for further clarification. I had to respond to the countless number of emails I was receiving each week. As part of the photography club at school, I was attending their weekly meetings. Also the AI club. I was the WEEF rep for our class. As well, the PDEng rep. I played ping pong twice a week. Watched movies biweekly. I had to do my own laundry. Manage my banking and loan affairs. Help friends out with their assignments and answer their telephone calls. Vacuum my residence. Maintain my photography website. Write blog entries. Call home each week. Keep up-to-date with my blogroll. Attend grad seminars twice a week. Finish up pre-labs and lab reports. Sit on lounge meetings with rez-mates. Complete long-term projects. Write cover letters. Apply for jobs. Attend interviews. Chat with people to build social connections. Midterms, exams, oh my. This and that and more!

I had to keep up to the Waterloo standard. There were too many smart people over there. Twenty four hours just wasn't enough. 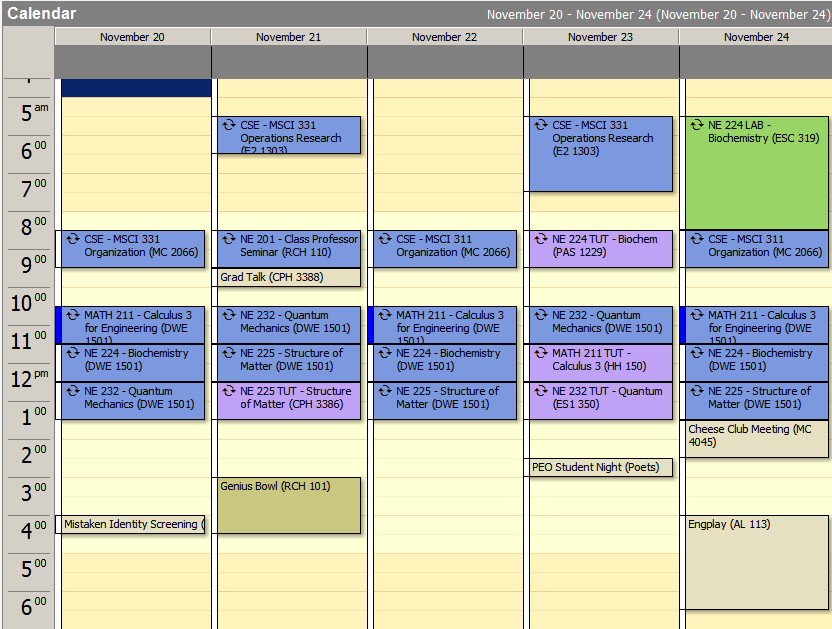 (the astute reader will have noticed that the times in the calendar above are in pacific standard, while the actual times are eastern — biochem labs at 5:30 AM ?!? you gotta be kiddin' right?)

I followed Steve Pavlina's Do It Now principle to great amazement. I was basically redefining the whole concept of time management. It was not as much time management as it was time government!

Efficiency is a measure of the amount of work done per unit time. The common unit of time is the hour. So the more you get done per hour, the more efficient you are. What surprised me most was not that my efficiency increased the longer I was awake, but that after a fixed amount of time it just dropped to zero. For me, that fixed amount of time was a magic number: twenty. It was like pedaling down a slope on a bicycle. The longer you're on the slope, the faster your speed increases. So at around 11 PM, when you efficiency peaks and you're at the pinnacle of your parabolic efficiency curve, it seems unfruitful to just wind-down and go to bed. The more I worked during the high efficiency period, the more work I got done for that particular "day".

Efficiency basically boils down to the following three things:

I always like to finish off my anecdotes by drawing an analogy to my favorite pass-time: walking. It doesn't matter how long you walk or how much time you spend walking. It's how many kilometers you walk per hour that eventually counts if you're trying to lose a few pounds.

Perhaps now I can convince my dad to see my point.